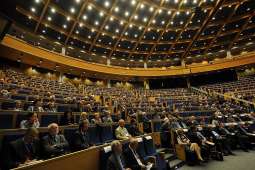 As of 2011, the Krakow’s Academic Conferences Project has been underway within whose organisational framework the city of Kraków has been promoted as a bona fide brand name during academic conferences and seminars, as convened by various local academic bodies. Although the actual thematic scope of these events is relatively broad, most of them address the city’s development strategies, innovativeness, and new technological or organisational solutions

The actual events are selected by a specially appointed committee made up of representatives of Kraków’s academic community, whose endeavours are co-ordinated by the Polish Academy of Sciences.

The Krakow’s Academic Conferences Project was originally initiated by Krakow’s Consultative Council, and then supervised by an internal Committee for Krakow’s Academic Conferences, whose routine prerogatives cover the assessment of applications submitted by any entities from the local academic community potentially interested in rendering assorted promotional services for the city during any academic events or congresses of international stature as convened by themselves.

On December 16, 2008, in pursuance of the Order of the Mayor of Krakow (Ref. No 2572/2008), the Krakow Consultative Council was established – an advisory body to the Mayor explicitly entrusted with the task of identifying the vital needs of the academic community, assessing any ventures and activities endeavouring to turn the city of Krakow into a modern and highly competitive research-and-development center, as well as promoting effective co-operation between the academic community and local government, with a view to implementing the strategic objectives of the city’s development.