Kraków is one of only a few cities in Europe to be endowed with a nearly completely preserved 19th-century fortress (the Kraków Fortress built by the Austrians) together with older and ancient elements of defensive architecture, including remnants of medieval city walls, the battlements of Wawel Hill, and late 18th-century fortifications from the Kościuszko Uprising.

The majority of the medieval city walls were demolished early in the 19th century. Following the concept of an open city, the defensive structures were replaced by a ring of municipal gardens later called Planty (the plantations). The Barbican, a consummate example of defensive 15th-century architecture, escaped demolition together with one city gate (St Florian’s Gate), and three towers. Only small sections remain from what used to be stout defensive walls: originally about 10 m (33 ft) high and 2 m (7 ft) thick. 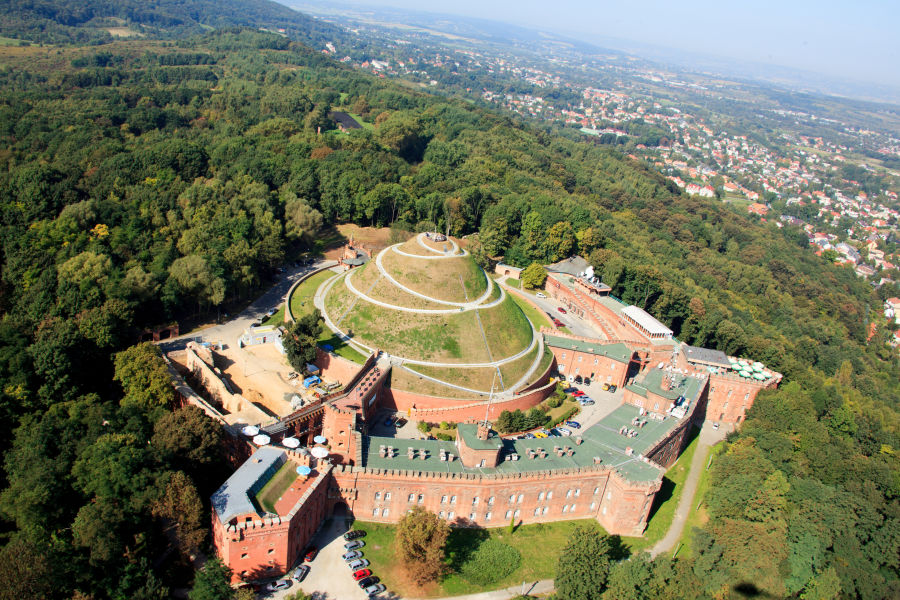 The traces of the oldest reinforcements in Wawel date back to around the 11th century, remnants of the stone walls surviving to this day – to the 13th, and the three tall brick towers – Thieves’, Sandomierz, and Senators’– so characteristic of the famed Wawel skyline – to the 14th. More modern structureswere also built to reinforce the hill’s defences, and include the Bastion of King Ladislaus (Władysław) IV, bearing the equestrian statue of Tadeusz Kościuszko. Wawel owes another part of its distinctive appearance, namely the outer limits of the citadel, to brick fortifications that are part ofthe Kraków Fortress.

The Fortress stands out among other tourist attractions of Kraków with its sheer size and unique quality as a system of military structures built by the Austrians in the 19th and early 20th centuries. Around 180 of them serving various purposes have endured to our time: forts, shelters, artillery batteries, relics of reinforcements, barracks, and former military hospitals. The core of the fortress was the city centre, which was surrounded by three consecutive rings of reinforcements developed in successive stages. The first (with bastions III Kleparz and V Lubicz having been preserved) ran along today’s Aleje Trzech Wieszczów. The external defence line, farthest from the Main Market Square, formed a circle with a radius of around 11 km (7 mi) and included forts in Kosocice, Bodzów, Pasternik, Tonie, and Grębałów. The entire circumference of the fortress was close to 60 km (40 mi).The most attractive sites include Kościuszko Fort ringing Kościuszko Mound, resembling a medieval castle, St Benedict Fort which is a remnant of an artillery tower, and Rajsko Fort picturesquely combining defensive architecture with greenery: a nature reserve and vantage point providing a great panorama of Kraków and the vicinity.)

Tags: history, tourism, Krakow, sightseeing, attraction
MPI browser
PUBLIC INFORMATION BULLETIN
OF THE CITY OF KRAKÓW
Places to go
What? Where? When?
For tourists