International cooperation in a nutshell...

Formal or informal? From project to agreement

Some of the basic types of agreements regulating the cooperation between Krakow and other international cities are: twin cities agreement, partnership agreement and honorary title of Krakow’s Twin City. See more… 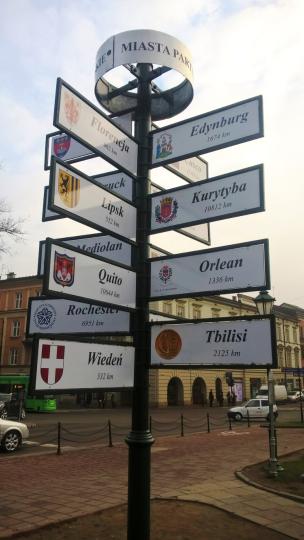 However, cooperation with some of the cities is based on other principles: basing on other signed documents (such as letter of intention, understanding, cooperation programmes for a specific number of years), or – in case of no signed document – shared experience and projects.

It is universally noticeable trend for international cooperation between cities to depart from the model of cooperation in which the first mutual action is signing a formal document. Instead, cities tend to cooperate on projects and share international ventures, which are to verify the potential for their cooperation before it becomes formalised.

Other European cities are a vast majority of Krakow’s international friends. As many as three partner cities are in Germany (Leipzig, Nuremberg, and Frankfurt am Main).

Krakow is open to the world and its contacts reach as far as North America (Rochester and San Francisco in the United States), South America (Cusco in Peru, Curitiba in Brazil, La Serena in Chile, Quito in Ecuador), Asia (Tbilisi in Georgia, Nanjing in China), and even Africa (Moroccan Fes).

The nearest located city – only 177 km away from Krakow – in Košice (Slovakia) with which Krakow cooperated without an official agreement. On the other hand, our farthest located partner is La Serena in Chile, 12 605 km away, (honorary twin city).

What once was and what is today

Even though a city’s international cooperation is not conditioned by the state’s politics, its directions and priorities are governed by specific social and political contexts and concerns of individual partners. Therefore, previous models of international cooperation were different from those favoured at the moment. It is all the more satisfying to observe long-term partnerships which have withstood the test of time!

Krakow’s youngest partners include Olomouc (Czech Republic): letter of intention concerning cooperation between the cities was signed on 2 June 2016.

Russia’s capital also holds the record for covered area as Moscow covers over 2561 km2! Saint Petersburg, situated on the Neva River, at the head of the Gulf of Finland, although smaller, covers areas including over 40 islands (connected by numerous bridges).

The smallest one is Solothurn in Switzerland with the area of 6 km2 and population of ca. 16 720 residents.

The highest situated city is Cusco in Peru with the breath-taking elevation of 3326 m.

The farthest north is Trondheim (Norway) and the farthest south is La Serena (Chile). Quito lies closest to the equator and it is also the only capital in the world directly menaced by an… active volcano (Pichincha).